Newcastle United boss Rafael Benitez has spoken positively about Miguel Almiron after the attacker dazzled during the club’s 2-0 win over Huddersfield Town this weekend. The Paraguay international made his full debut against the Terriers and he put on a show which earned him the praise of the club’s faithful. 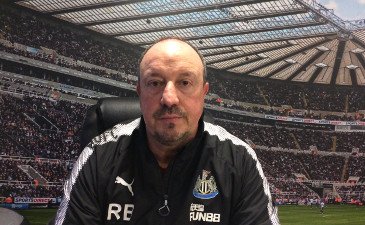 Almiron could not contribute towards the club’s scoresheet on the day but he was still praised by the supporters after orchestrating the attack with as many as three shots on target. Following the game, Benitez was impressed with the showing of the club’s winter signing and sympathised that the forward could not score his maiden goal.

He said: “He did well. Obviously he’s a different kind of player with different characteristics and he is giving us another option so if you have to change something, you can make the difference with one player or another player, so it has been positive. It was a pity for him because he could have scored and it would have been even better. Yesterday when you were asking me, I knew that he was playing! I wanted to make a headline!”

The Magpies squandered a 1-0 advantage against Wolverhampton Wanderers during stoppage time in the previous gameweek and that certainly frustrated Benitez with the team fighting to beat the drop. However, there were no such concerns against free-falling Huddersfield for the weekend and goals from Salomon Rondon and Ayoze Perez ensured a routine triumph against an opposition, who were down to 10 men after just 20 minutes.

Next up, the Tyneside outfit have another home game against Burnley in midweek but the game should pose a stiffer challenge, given the form of the Clarets. Sean Dyche’s team are unbeaten in the Premier League since the turn of the year and the Magpies can expect strong opposition with Chris Wood and Ashley Barnes in good run of form.